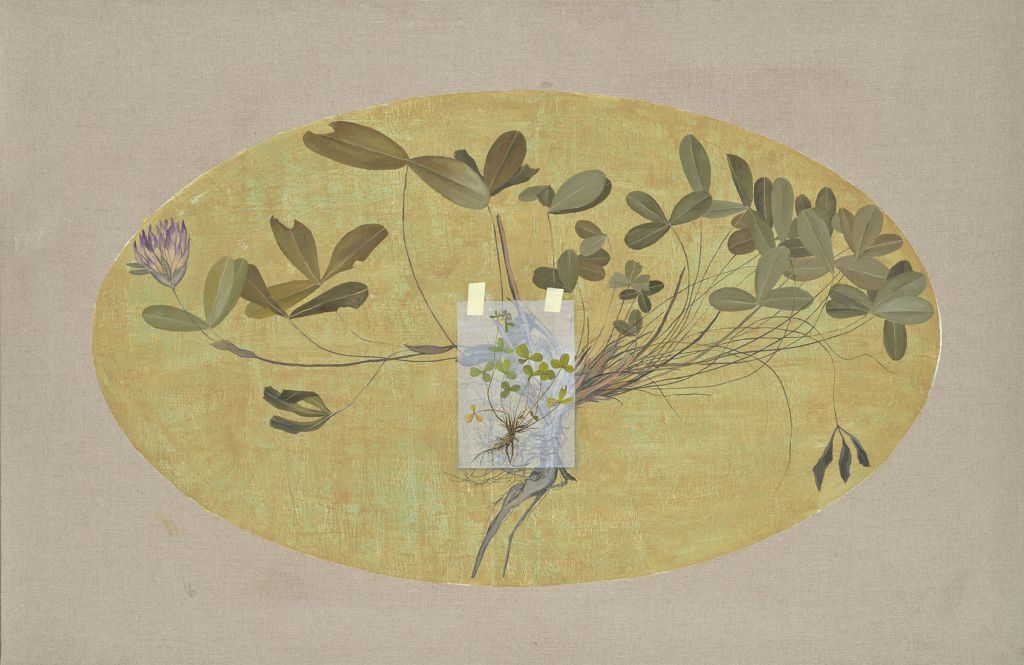 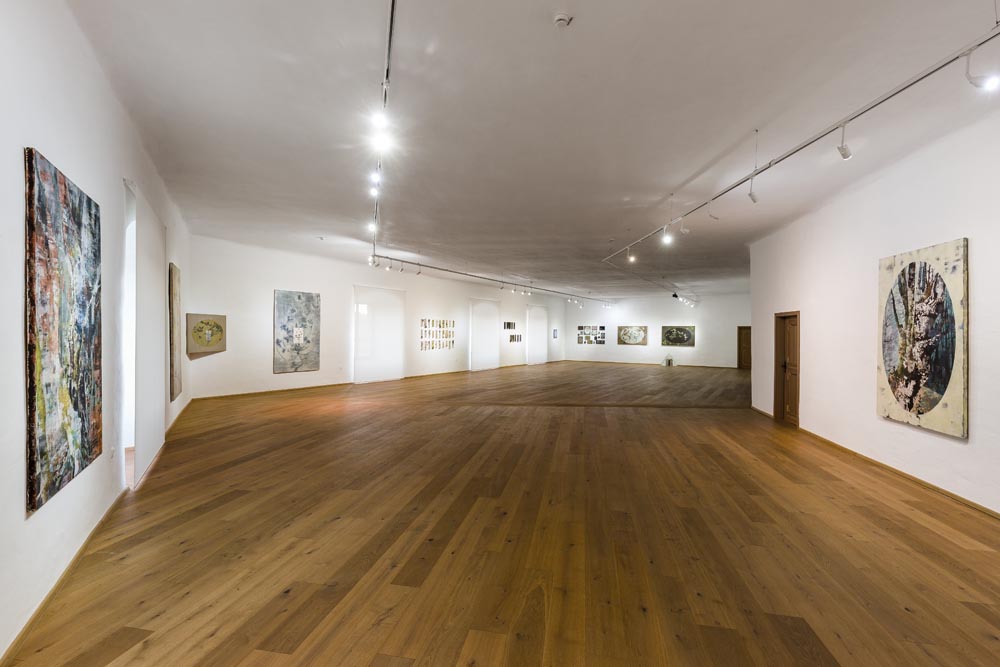 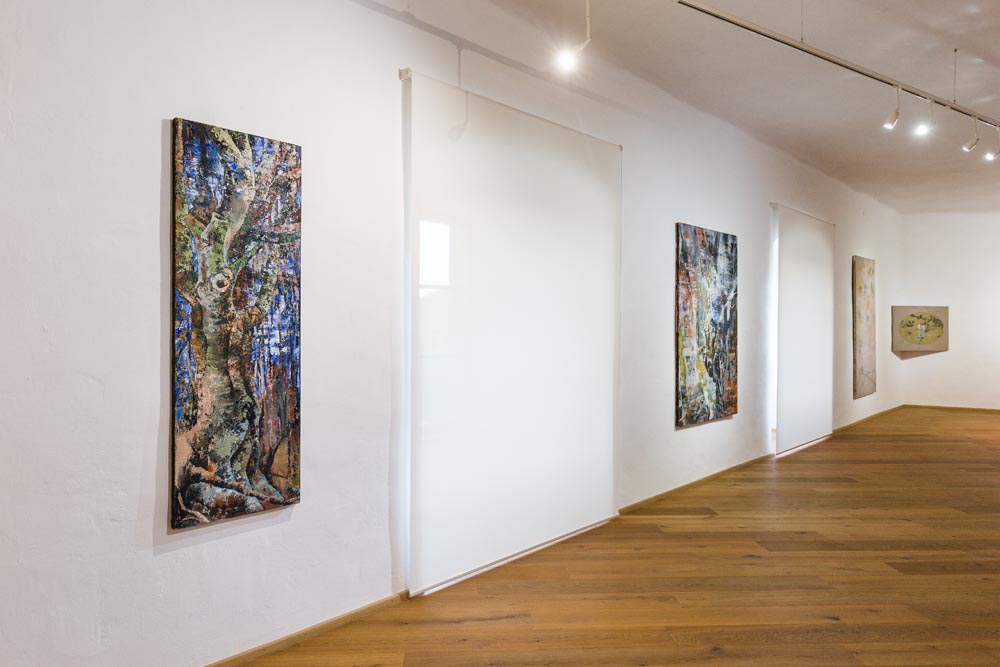 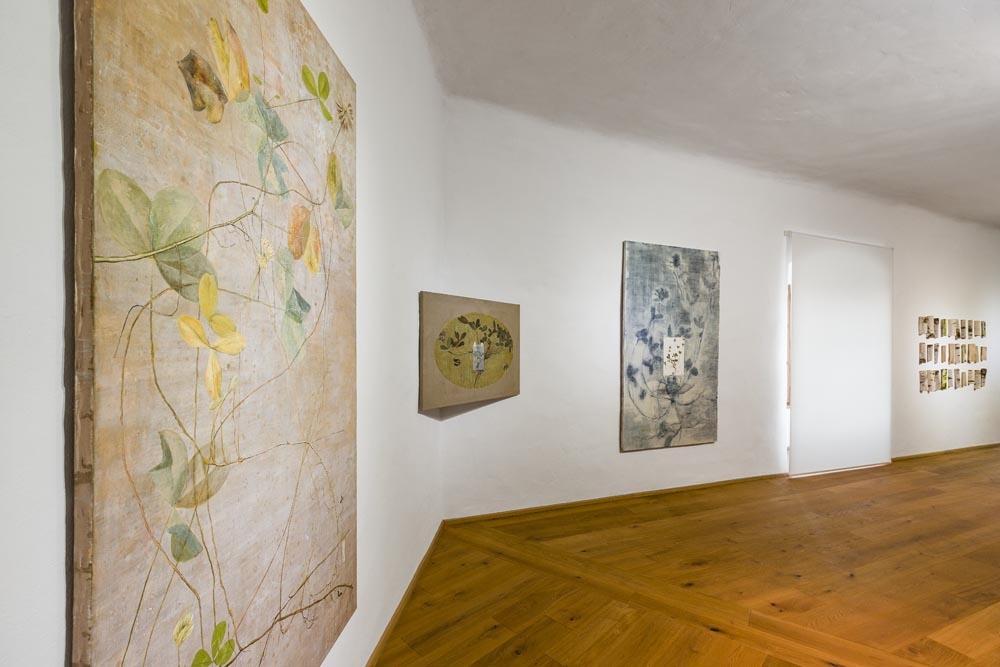 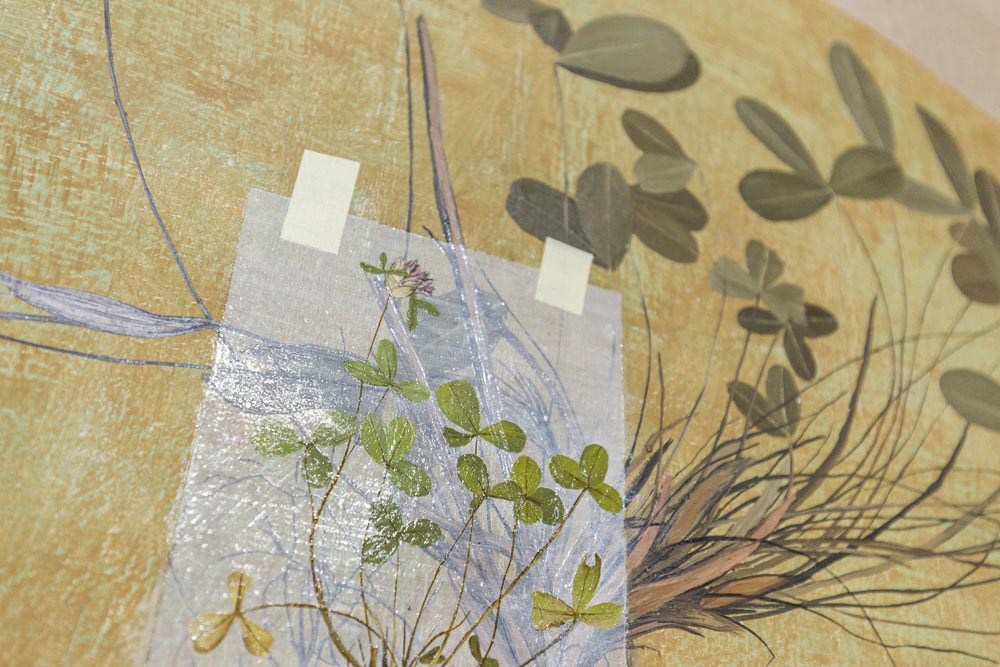 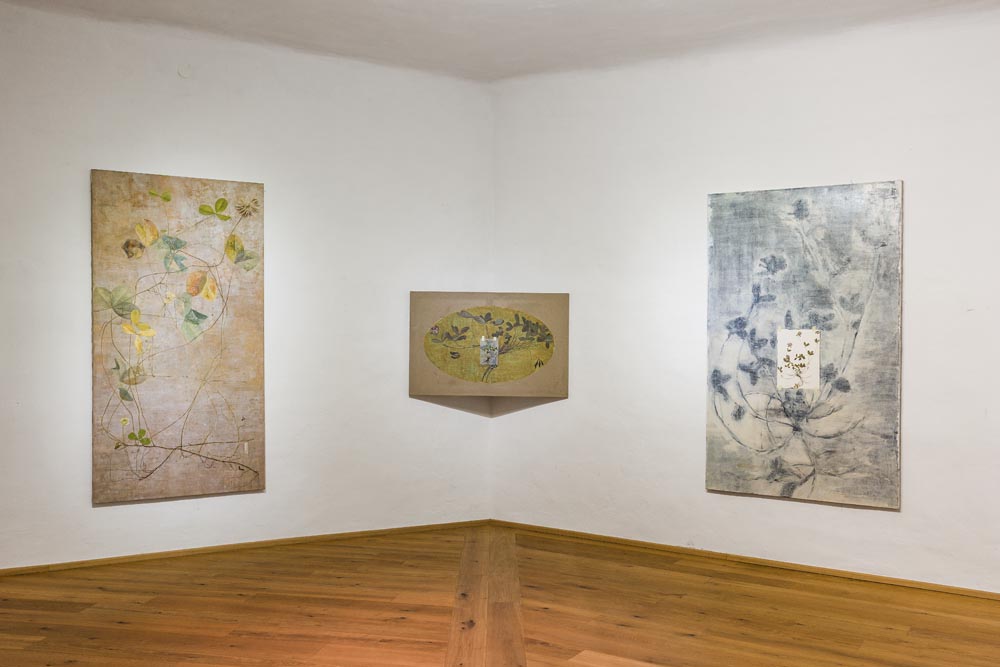 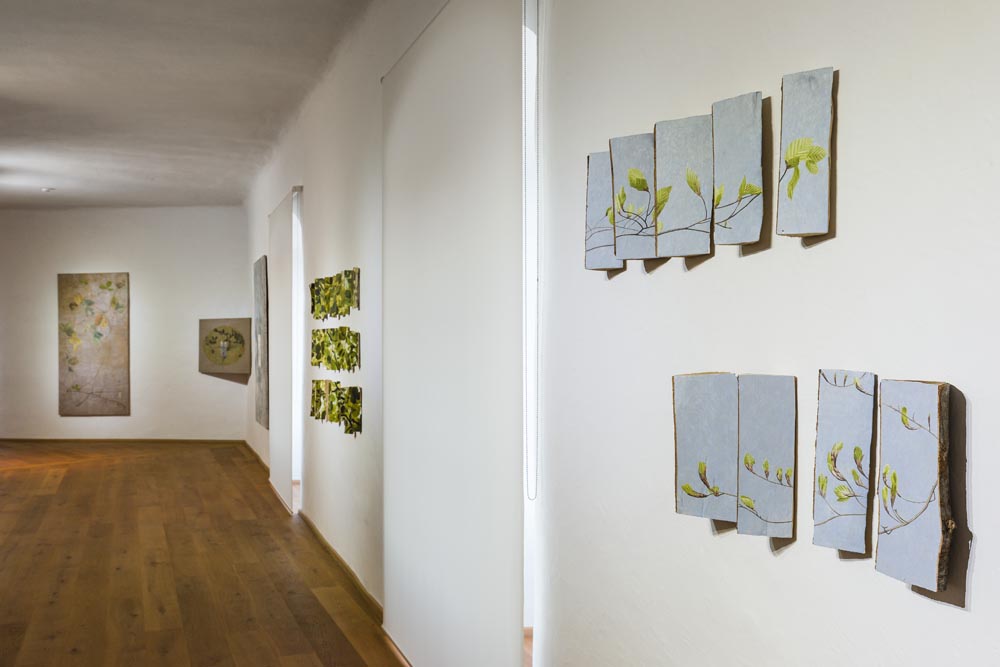 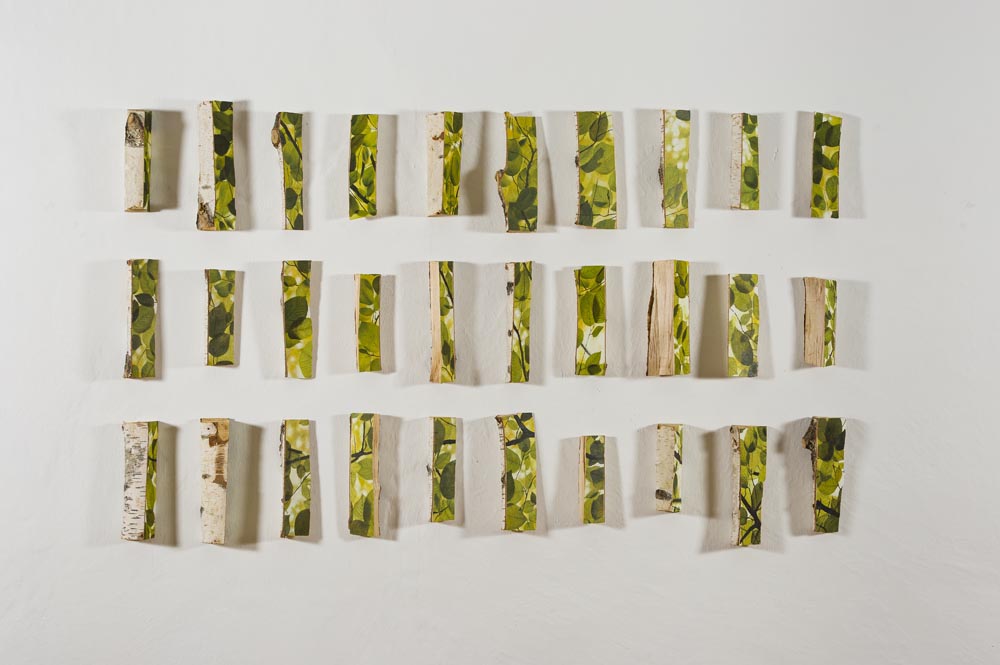 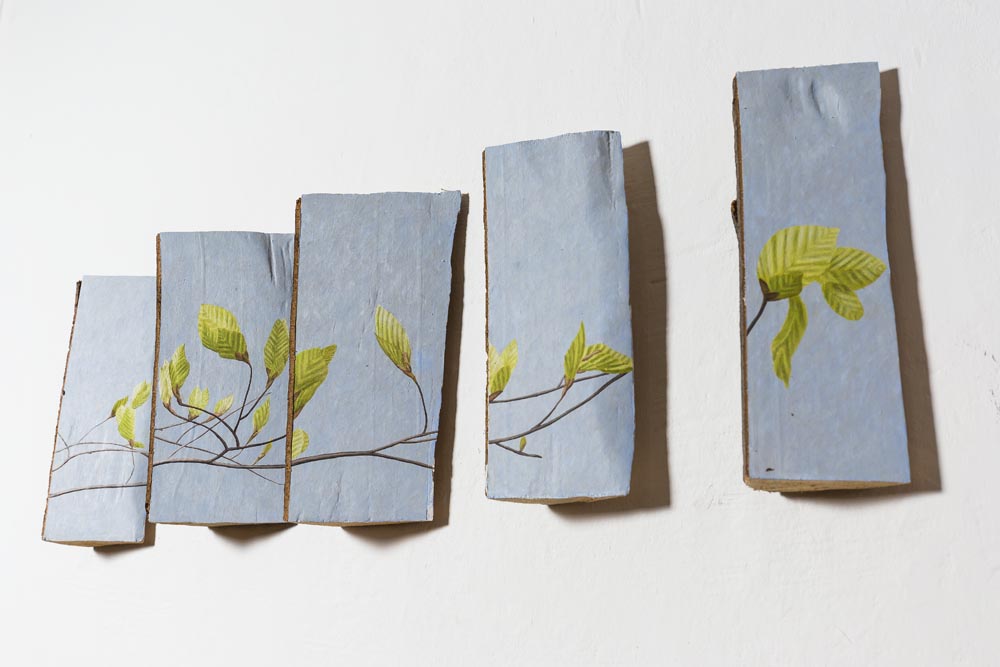 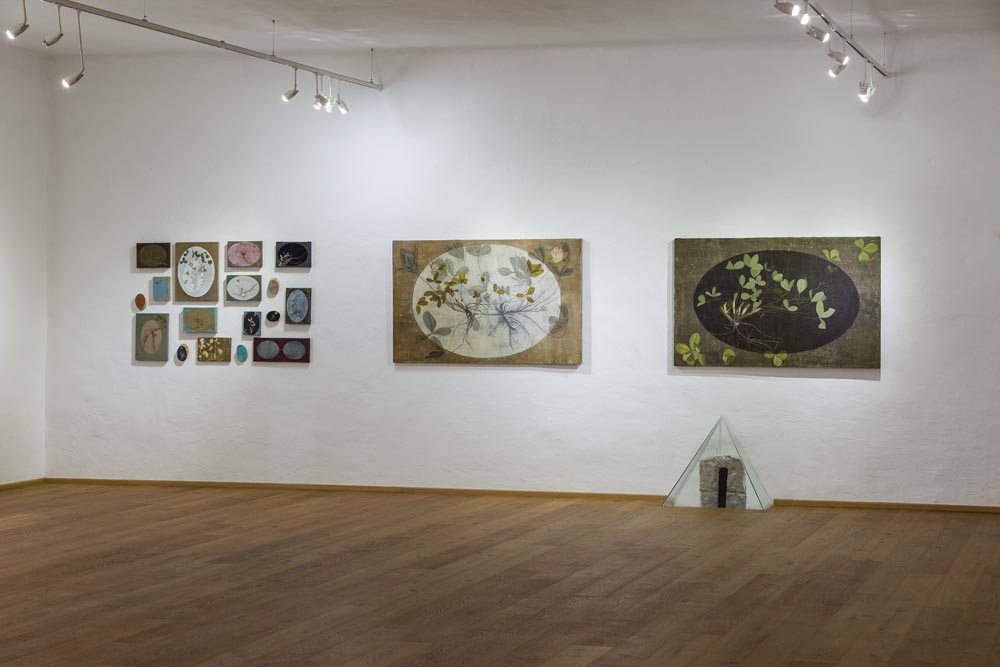 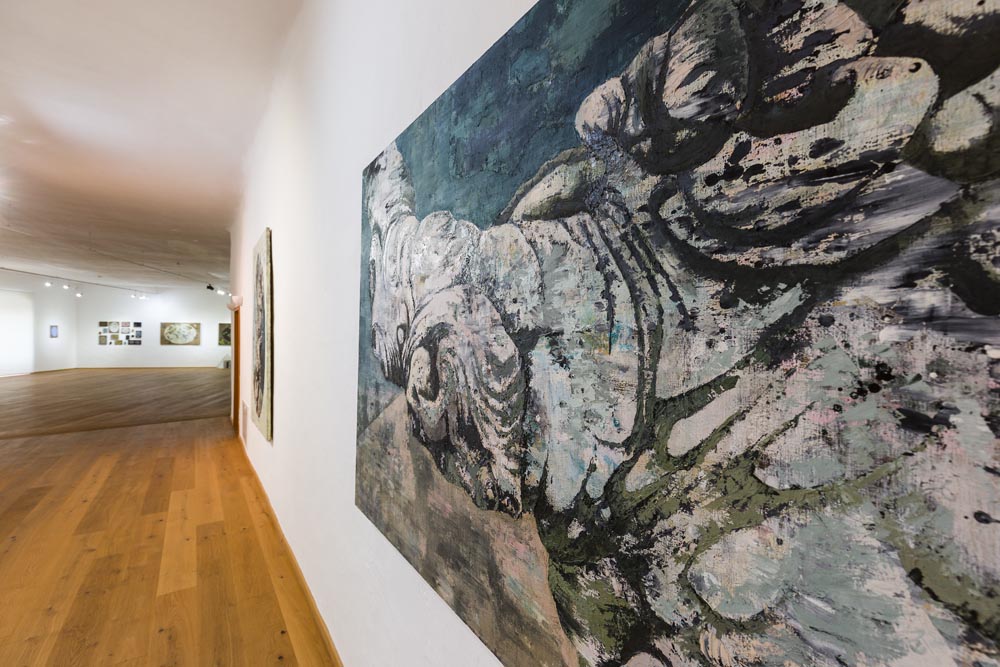 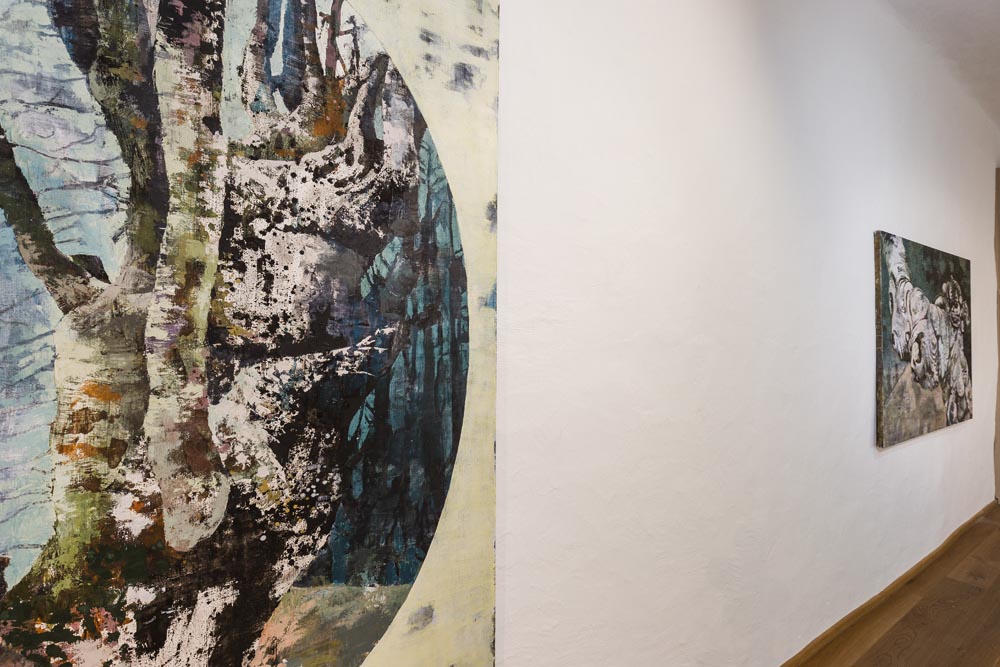 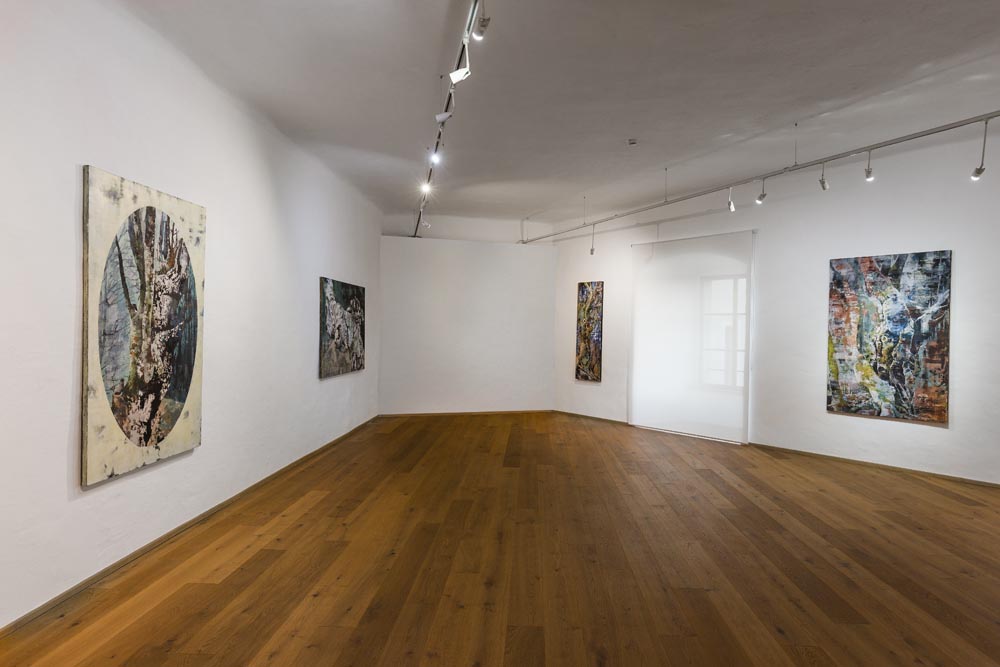 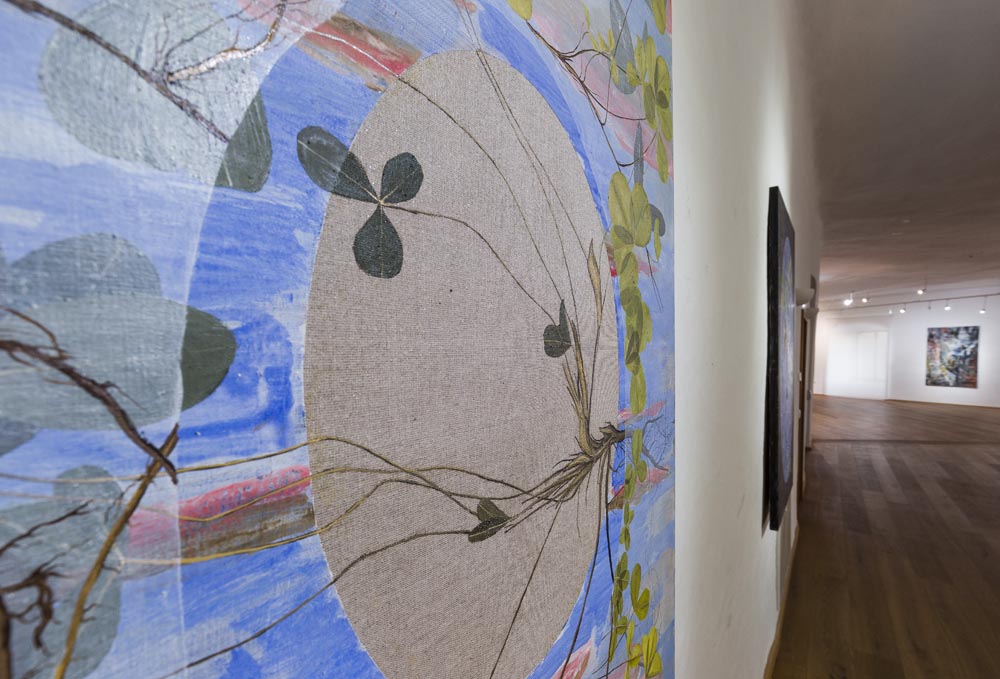 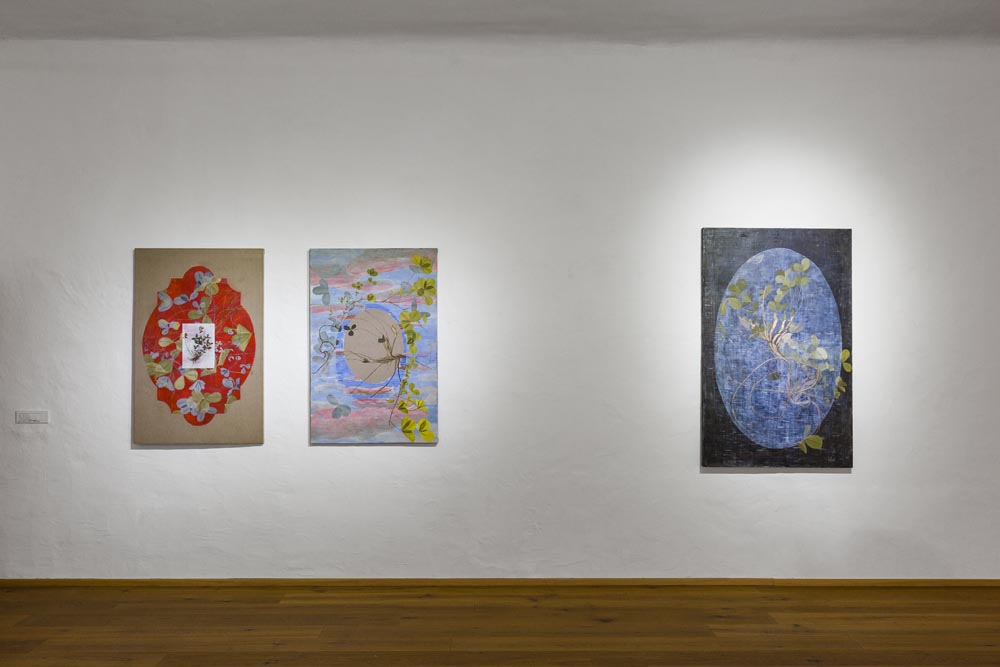 Art is most commonly a reflection of nature or society. The borders of transition are usually thin and often depend on the point of view, however generally we can say that artists who deal with nature are more introvert, while those who deal with social issues are more extrovert. Anja Jerčič Jakob is certainly more focused on nature. Her attitude towards nature is extremely sacred and intimate, and her interpretation is not merely an imitation, for she plays a creative participant within the process. With this she enters the field of social issues, but in a personal, one could say pantheistical religious manner. Anja Jerčič Jakob often depicts the collected plants in their entirety, which gives them a slight scientific feeling, however with their historical distance they also take our mind back to the Renaissance. The plant collecting process is a way of cultivating nature and in certain cases it becomes a work of art, which can be found hanging on the wall. While looking at them we have to ask ourselves where does this need to create these images on a large canvass emerge from? And can her works be read merely as an image of an image?

However, even though the answer does not have a single unambiguous meaning, we can immediately notice that Anja Jerčič Jakob’s works carry a certain je ne sais quoi within them. Even though nature is omnipresent on her canvases and her paintings and work process often show similarities with processes that take place in nature, Anja is not a painter of nature. Anja seeks for something extra or for that something in between. Her works clearly show a historic attachment to the painting tradition, which is often substantiated by Latin exhibitions titles, which has been written about by numerous critics, but which is by no means binding. Her works are not Renaissance studies, they do not depict encyclopaedic knowledge, we do not search for Parmigianini’s concave convex mannerist painting solutions within her oval forms, nor do we search for Baroque allegories which we would have to – according to this principle – exhibit on the ceilings of exhibition spaces.

As regards the motifs Anja Jerčič Jakob’s opus is extremely narrow, however the artist leaves endless variable moments within it. As regards the interpretation this could cause a problem, until we try to disappear into the »shared« cracks of these variable moments. If we try to interpret the artist’s view of nature through phenomenology, as determined by Maurice Merleau-Ponty in his exceptional book Phenomenology of Perception, we can quote the thought of the Slovene philosopher Marko Uršič, who, in his book Four seasons – Autumn: Man and Universe, 2010, wrote: »In this consistent phenomenological understanding of the world we can of course recognise his predecessors: Husserl’s Welt or Umwelt or Lebenswelt, Heidegger’s Weltlichkeit der Welt or his basic existential structure In-der-Welt-sein, etc. The difference lies in the fact that Merleau-Ponty understands the original obviousness of the world in the perception, i.e. inter-subjectively (analogue to Husserl): »We are in the realm of truth, and it is the ‘experience of truth’ that is self-evident.« – we are plural, for even though the »experience of truth« is always »subjective«, originally mine, my perception is open towards the »outside«, not merely intentionally into the object world, but also to other »essences of people in this world«, getting to know itself and the world in the horizon of other perceptive and thinking »subjects«.«

I always perceived these »open towards the outside« perceptions as I managed to capture one of the rare moments of silence and solitude and the special feeling that comes with these moments, first in the hallways of the mining secondary school in Velenje, and later while standing next to the characteristic classical cabinets found on the ground floor of the Faculty of Arts in Ljubljana, where one could admire the fossils captured in stone. Even though the botanical organisms were no longer there, they left their traces in the layers of rock and with this opened my subjective experience of the truth outwards. I perceive Anja Jerčič Jakob’s works in the same way, fully aware that an important role at this is held by the genius loci. We both came from the Velenje basin, ‘layered with blackness’. A few years back, as I admired her gigantic – yet precise to the smallest detail – cloves on canvasses, which dictated a number of Latin titles for her exhibitions with their omnipresence, I was sucked in by the exceptional blackness of the background. I was looking at a space, which is not a space but is at the same time a space of all spaces. The artist created a clover in its entirety, including the roots, on the oval shaped blackness; it is important to understand that the clover was layered and ran across the edge of the oval on the canvass. In Anja Jerčič Jakob’s paintings the three leaf clover, which is often interpreted as a symbol of the body, mind and spirit and linked to vitality and life force, freezes and resonates towards eternity. We perceive it as memento mori, as a pre-trace of the future non-presence caught between the layers of endless lignite. The clovers are monumentally and graciously created in egg tempera and oil on canvass, which does not merely show Jerčič‘s mastery of the metier, but also indicates that her approach to work shows respect and commitment to the painter’s guild.

If the depictions of clovers are marked by the historically determined structure of order, the exhibited works entitled Abandoned Places, 2013 posses an imminent expressive gesture, which while technologically the exact opposite, is symbolically still closely linked to the previous series. Even though light and colours interweave in her works which depict fragments from nature, and I would often like to haptically verify what is in front and what behind, which gives the paintings their dynamics, the captured nature still looks numb, for it is reminiscent of an untouched virgin forest, eternal in its fossilised finiteness.

Such a manner of thought is also inspired by the previously mentioned perception obviousness found in her other works, which are not classically created on canvass, but on wood logs. The cloves created within the series Weeds, 2010 positioned on a black base with added gild (coal as black gold) hover into eternity, similar to the ones described in the previously mentioned paintings. Those created within the series Tree, 2016, exhibited at the Reichenburg castle, preserve the »natural light« of the birch, while the strong sunlight breaks through the fragment of oil painted leaves, as an ode to life. A moment that freezes time. A moment that can cross the awareness of transience. A moment that carries within it that certain ‘je ne sais quoi’.